By Krista Tippett, On Being, Br. David Steindl-Rast, OSB

(On Being, Original air date January, 2016, updated and rebroadcast, April 2020) Br. David speaks to Krista Tippett of mysticism as the birthright of every human being, and of the anatomy and practice of gratitude as full-blooded, reality-based, and redeeming… 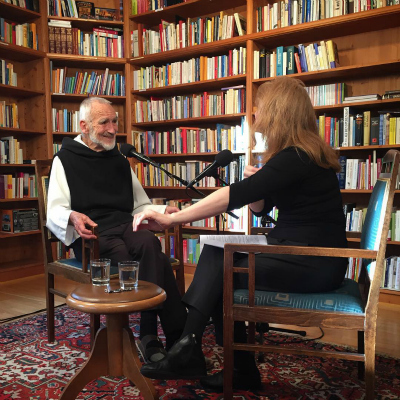 Hear Krista Tippett’s award-winning show, On Being, a one-hour conversation with Br. David:

Brother David Steindl-Rast has lived through a World War, the end of an empire, and the fascist takeover of his country. He’s given a TED talk, viewed over five million times, on the subject of gratitude — a practice increasingly interrogated by scientists and physicians as a key to human well-being. He was also an early pioneer, together with Thomas Merton, of dialogue between Christian and Buddhist monastics. In this conversation from our visit to the Gut Aich Priory monastery in St. Gilgen, Austria, he speaks of mysticism as the birthright of every human being, and of the anatomy and practice of gratitude as full-blooded, reality-based, and redeeming.  See this page for a transcript of this interview.

Krista Tippett, On Being

What does it mean to be human? How do we want to live? And who will we be to each other? Each week a new discovery about the immensity of our lives. On Being with Krista Tippett airs on more than 400 public radio stations across the U.S. and is distributed by WNYC Studios. The podcast has been played/downloaded more than 350 million times.
See more content by Krista Tippett, On Being