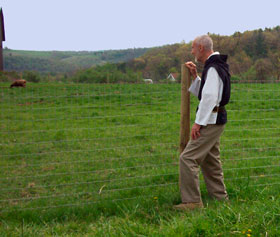 The monastic life is like digging into a well: over the years you dig deeper and deeper in your own understanding of things, until the day arrives that you reach the waters that connect us all.

I have grown so dependent on my cellphone GPS when traveling to new places that I barely gave it a thought last August when driving from Amherst, MA to Mount Saviour to meet Brother David. Things started off well enough, but somewhere near Binghamton, NY, I noticed that the phone’s battery was crashing toward zero. Quickly. A stop at a diner to charge up only encouraged it to drain faster and by the time I hit Elmira, I was desperately trying to figure out how to perform CPR on the dimming display hoping that I could coax it into pointing out some hillside where I could wing the last few miles. Just after it led me onto Route 225, my phone shut down, and just then Monastery Road appeared in view.

The barn at Mount Saviour

To say that Mount Saviour was serene that day is not quite accurate: it was silent, and not just in the monastic way. It was Twilight Zone deserted. There was one other car in the parking lot, but no evidence at all of living beings. I sat in the bright sun and waited a while, hoping someone – anyone — would appear to show me where Brother David might be. No one came. I tried what looked like a promising door, finding a reception desk behind it, with a few magazines, some candles for sale, and honey, but there were no candle makers or beekeepers. Above all else, there was silence. Even the birds outside apologized for chirping.

Trodding up the hill to the chapel, I thought I saw the hem of a black robe disappear around a corner, but there was no one there either. Only stillness upon stillness. The farmhouse nearby was deserted too, but when I came around the side, a couple — civilians to all appearances — suddenly manifested and whispered that they didn’t know where Brother David was, but that I might try the promising door again.

So I did try the door. And I sat inside. And waited. After some quiet minutes, a monk came gliding up the hallway and said “You must be from UMass.” Brother John, the Prior, seemed to know who I was and why I was there and suggested that I might wish to wait until noon, when all the Brothers would appear to gather in the chapel to perform their offices.

Having never been to a monastery before, I was unaware that time in that spiritual place bends to the moment, and discovered soon that it was up to me to adjust to its pace.

As noon approached, the brothers trickled into the chapel – a round room with entrances at each cardinal point – and sat quietly in their seats. With a bright blue sky outside and an audience of one within, they went about their devotions as if they had done it all before. After the final chord, Brother David walked directly over to greet the stranger in the room — me — offering a tour of the premises. Having never been to a monastery before, I was unaware that time in that spiritual place bends to the moment, and discovered soon that it was up to me to adjust to its pace. For two hours, Brother David led me through the grounds, laying out a tour of time and the monastery, sharing his memories of Father Damasus, the founder, and of his own entry into the order. He mentioned that as a young seeker on a first visit to Mount Saviour, he was kneeling at work in the garden when Damasus asked whether he wished to live strictly by the rules of Benedict, and he knew instantly that he had arrived where he would be, and where he has been.

We walked through the rooms beneath the chapel where the monks have met and prayed for sixty years, past the original house where the first arrivals once lived, and then across the road to the residence that served as Brother David’s first quarters. Calling it a residence is too grand, it was a barn with rickety boards splitting the gaps, a barn where they set up a tent indoors to keep warm in winter.

It was memory written on memory for Brother David, but all in the present tense, a time of young men pioneering a spiritual pathway, a time when the ethereal was grounded with hands in the soil.

We went on to other barns where the monks stored hay and grain and equipment, and a stall where they milked – when they had cows, and we looked over the outbuildings where they had once thrown pots. It was memory written on memory for Brother David, but all in the present tense, a time of young men pioneering a spiritual pathway, a time when the ethereal was grounded with hands in the soil. It was about the care of sheep and the love of cows he had learned as a young man in post-war Austria; it was all about the love of a simple life of devoted labor.

As Brother Pierre raced by on an ATV, headed for the pasture to tend his sheep, we crossed back toward the large residence the Brothers had built by hand as the community grew, and then over to the chapel again and the new residence behind, now decades old. Round like the chapel, the library was the portal to the brothers’ rooms, tying them daily and nightly to the word and the quiet of learning and spiritual growth. And finally, we walked outside to the community graves and read each name and each story as if they were as present as they actually are.

There, among the brothers, in locus solus, I thought about something Brother David had mentioned when I first met him at his 90th birthday celebration in San Francisco. Asked how someone so steeped in a religious tradition like Catholicism could find his way into exploring so many other faiths, he replied that the monastic life is like digging into a well: over the years you dig deeper and deeper in your own understanding of things, until the day arrives that you reach the waters that connect us all.

Rob Cox led a checkered life before becoming head of Special Collections and University Archives at UMass Amherst in 2004 after stints at the University of Michigan and the American Philosophical Society. A recovering paleontologist and molecular biologist, he received a PhD in history from Michigan and has written a number of articles and five books on topics
ranging from the American Spiritualist movement to the plants of the Lewis and Clark expedition and New England culinary history.

On Sunday, October 1, 2017 from 3 – 6 p.m., the UMass Amherst Libraries will host an event — “If You Want to be Happy, Be Grateful: The Life and Teachings of Brother David Steindl-Rast”– celebrating the archive collection of Br. David. The event will take place at the Old Chapel, University of Massachusetts Amherst and is FREE to the public. Please note: Br. David will not be attending the event. To learn more and register. 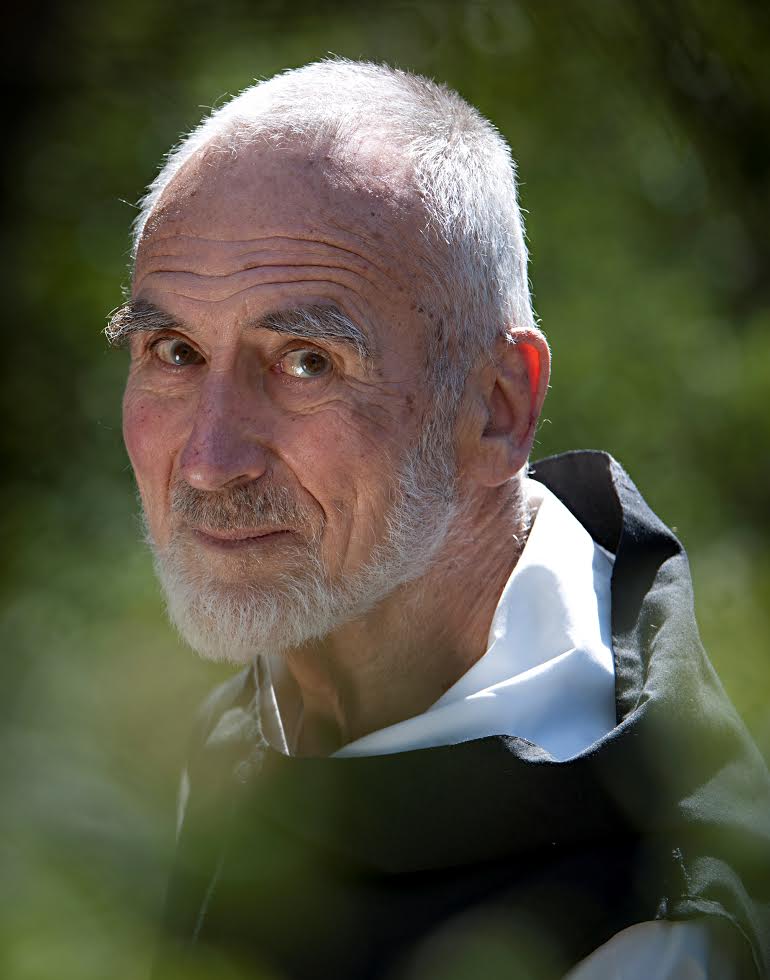 The Gospel of Gratitude According to Brother David Steindl-Rast 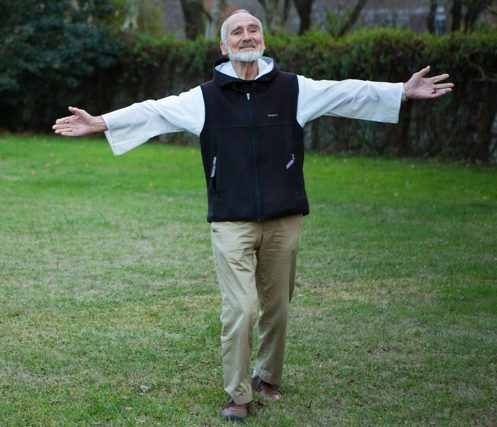 A Network for Grateful Living reflects the hearts, skills, and minds of many people. Only…